George was born on January 1 1924 in Regina Saskatchewan as the son of Claude (Welsh and place unknown) and Evelyn Thomas, of North Burnaby, British Columbia. His brothers were Roderick, Albert, Kenneth and Jordan Thomas and his sisters Phyllis Thomas and Marilyn Dasny.
He was a shipyard stager and member of the United Church. He enjoyed dances, rugby, skiing, active nature, shows and reading sometimes.
He enlisted on June 28 1943 in Vancouver and he went on October 20 1944 overseas to the UK and he went thereafter on November 18 to NW Europe.
George was killed in action on Wednesday March 28 1945 age 21 in the C Coy near Emmerich Germany during the battle of the Rhineland. And he was temporarily buried in Vrasselt Germany and he was then on February 13 1946 reburied in Groesbeek.
At his headstone: IN HIM WE FIND PERFECT REST
His medals were: 1939-45 Star; France Germany Star; War Medal; CVSM & Clasp. 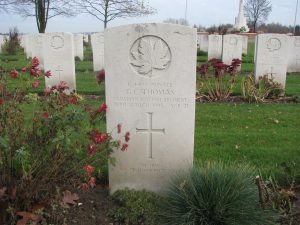