Harold was born on November 18 1924 in Seattle USA as the son of Harold and Violet Maude Broadhead (both English) of Vancouver. His parents were married on July 1 1920 in Vancouver. His brothers were Ronald L. and Alan C. Broadhead and his sisters were Mrs. Jhona Reid and Corina P., Dolores P, Shirley E., Leonel D. and Gloria A. Broadhead.
He was a clerk and member of the Church of England. His hobbies were boat building and woodwork and he liked shows.
He enlisted on September 22 1943 in Vancouver and he went overseas to the UK on June 2 1944 and thereafter as reinforcement on July 14 to France.
Harold was killed in action on Tuesday August 15 age 19 in the A Coy near Falaise and he was temporarily buried 2 km’s East of Soulangy and reburied on May 17 1945 in Bretteville S/Laize.
His medals were: 1939-45 Star; France Germany Star; War Medal; CVSM & Clasp. 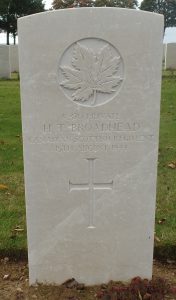