Harry was born on November 1 1915 in Victoria British Columbia as the son of Richard and Elizabeth Birch. His parents were married on April 11 1895 in Liverpool England. His father died of wounds of WW 1 in April 1940. He was married on June 5 1944 with Agnes Alexandra Birch. His brothers were: Richard T. (in the army overseas), Ben (also in the army in Canada ) and William Birch and his sisters: Mrs. Mary E. Bayliss, Mrs. Charlotte Webb, Mrs. Francis Smith and Mrs. Doris Mauro.
His profession was a fuel merchant and he was member of the Baptist Church.
He enlisted on June 30 1940 in Victoria and he went overseas to the UK on September 2 1941 and thereafter to France on July 3.
Harry died of wounds in the SP Coy Mortar on Sunday July 9 1944 age 28 near Cussy and he was reburied on November 9 in La Delivrande.
His medals were: 1939-45 Star; France Germany Star; Defence Medal; War Medal; CVSM & Clasp. 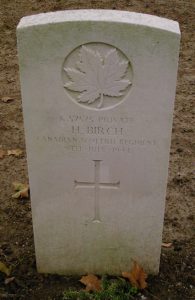