Hector was born on March 23 1919 in Prudhomme Saskatchewan as the son of Ernest and Mrs. Painchaud (deceased). His parents were married on April 19 1910 in Prudhomme. His brothers were Alfred, Donat, Leon and Felix Painchaud. And his sisters were Delia and Cecile Painchaud.
His profession was a carpenter and he was member of the Roman Catholic Church.
He enlisted on January 28 1943 in Vancouver and he went overseas to the UK on July 2 1943 and he went thereafter to France on June 6 1944 for the D-Day landing.
Hector was killed in action on Saturday June 10 age 25 in the B Coy near Putot en Bessin and he was temporarily buried there and he was on January 18 1945 reburied in Bretteville S/Laize.
And his medals were: 1939-45 Star; France Germany Star; Defence Medal; War Medal; CVSM & Clasp. 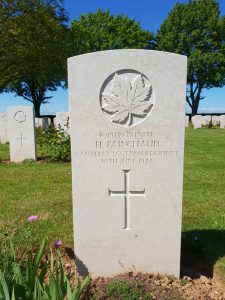