James was born on June 9, 1903 Bridgewater, Somersetshire, England as the son of Thomas (deceased) and Anne Anglin. He was the husband of Norah Kathleen Anglin, of Vancouver and they married on May 15 1943 in Vancouver.
His brother was Capt. Thomas Anglin and his sisters were: Margaret and Kathleen (married). All living in England. His other brothers Joseph, Patrick and John Anglin were all three killed in action in WW 1.
He was a pulp millworker and s member of the Roman Catholic Church.
He enlisted on October 30 1942 in Vancouver and he went overseas to the UK on December 15 1943.
James was killed in action on Tuesday June 6 1944 age 40 during the landing in the C Coy in the first wave at the beaches of Normandy. He was temporarily buried at Lantheville graveyard and reburied on July 27 1945 in Bretteville S/Laize.
At his headstone: A.M.D.G (Ad maiorem Dei gloriam or Ad majórem Dei glóriam, means For the greater glory of God)
His Medals were: 1939-45 Star; France Germany Star; War Medal; CVSM & Clasp.
He served with the Canadian Scottish Regiment and also in the Somerset Light Infantry. 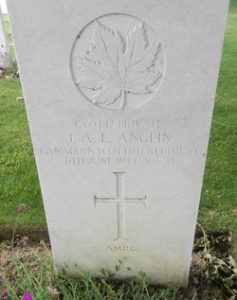