James was born on May 13 1907 in Saint John New Brunswick as the son of Charles (deceased in 1942) and Stella Irene Bell, of Saint John. His parents were married on October 5 1903 in St John. He was married on June 1 1938 in St John with Edna Margaret Bell, of Saint John. Their son was Walter Buiton Bell. His half-brother was Ernest L. Bell and his sister was Jessie Weeds.
He was a labourer and member of the Church of England. His hobby was reading fiction.
He enlisted on October 6 1939 in St John and he went overseas to the UK on May 22 1943 and he went thereafter as reinforcement on June 7 1944 to France.
James was killed in action on Saturday July 8 age 27 in the C Coy near Cussy and he was temporarily buried there and reburied on February 7 1945 in Beny S/Mer.
At his headstone: WINDS OF HEAVEN BLOW SOFTLY O’ER THIS SWEET HALLOWED SPOT ONE WE LOVE LIES SLEEPING WHO WILL NEVER BE FORGOT
His medals were: 1939-45 Star; France Germany Star; Defence Medal; War Medal; CVSM & Clasp. 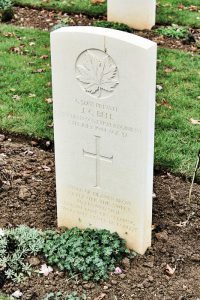