James was born on November 9 1912 in Meaford Ontario as the son of Mr.(first name unknown and deceased) and Margaret MacKellar of Owen Sound Ontario. He was married on December 5 1931 with Georgina MacKellar of Owen Sound.
He was a boat builder and member of the Church of England.
He enlisted on September 18 1939 in Walkerton Ontario and he went on November 22 1941 overseas to the UK and he went thereafter on September 7 1944 to France
James was killed in action on Monday February 19 1945 age 32 in the A Coy near the Moyland Wood during the battle of the Rhineland. And he was temporarily buried in Bedburg Hau Germany and he was then on September 19 1945 reburied in Groesbeek.
His medals were: 1939-45 Star; France Germany Star; Defence Medal; War Medal and CVSM & Clasp. 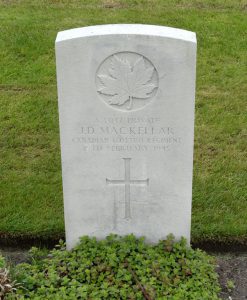