James was born on March 9, 1912 in Bladworth, Saskatchewan as the son of Mr. (deceased) and Mary Agnes Ashley (both English). His parents were married in 1911 in Montreal. He was married on October 14 1932 with Veronica Cecilia Ashley of Kelowna, British Columbia. Their two daughters were Alice Joanne and Barbara Ann Ashley. His sister was Mrs. Orville Curts.
He was a carpenter and truck driver and member of the Church of England.
He enlisted on September 3 1940 in Kelowna and he went overseas to the UK on September 2 1941 and he went thereafter as on June 6 1944 to France for the D-Day landing. He was wounded then and brought back to England and he went on September 3 back again to France.
James was killed in action on Saturday September 30 age 32 near Calais and he was temporarily buried in Hardinghen and reburied on July 31 1945 in Calais Leurbringhen.
His medals were: 1939-45 Star; France Germany Star; Defence Medal; War Medal; CVSM & Clasp. 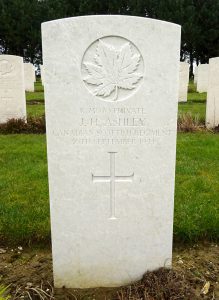