James was born on January 27 1915 in Saskatoon Saskatchewan as the son of Alfred James (deceased) and of Grace Ellen Worthington, of Abbotsford, British Columbia. They were married on May 21 1919 in Perdue Saskatchewan. His mother remarried later as Mrs. Dibley. Note he had permission to marry Florence Napier Haig of Glasgow Scotland on or after May 27 1944 but it is not known if this really has happened too. His bothers were Richard and Norman Worthington and his sister was Grace Lunderson.
He was a farmer and member of the Church of England.
He enlisted on September 1 1942 in Vancouver and he went on May 22 1943 overseas to the UK and he went thereafter on June 6 1944 to France for the D-Day landing. He was seriously wounded in action on June 9 during the battle of Putot en Bessin and he was evacuated then to a hospital in Southampton England.
James died there of these wounds on Wednesday June 14 age 29 and he was then buried at the Brookwood Military Cemetery.
At his headstone: OFTEN A SILENT HEARTACHE OFTEN A SILENT TEAR ALWAYS A BEAUTIFUL MEMORY OF ONE THAT WE LOVED SO DEAR
His medals were: 1939-45 Star; France Germany Star; Defence Medal; War Medal; CVSM & Clasp.

His name is too at the monument in Putot en Bessin. 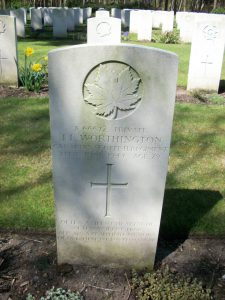