James was born on March 12 1925 in Calgary as the son of Stanley (English and deceased in 1926), and of Marie (American) Myhon, of Quesnel, British Columbia. His parents were married on August 14 1920 in Calgary. His mother remarried in 1935 as Mrs. Cyr. His sister was Mrs. Grace Marion Hughes and his half-brother was John Alfred Cyr and his half-sister Joyce Marie Cyr.
He was a logger and member of the Church of England. He played a harmonica and liked western music
He enlisted on March 20 1944 in Calgary and he went on June 2 1944 overseas to the UK and he went thereafter on July 11 to France.
James was killed in action on Saturday October 28 age 19 in the C Coy near the Breskens Pocket and the Scheldt in Holland and he was temporarily buried in Hoofdplaat Holland and on June 12 1945 reburied in Adegem.
At his headstone: GREATER LOVE HATH NO MAN THAN THIS, THAT A MAN LAY DOWN HIS LIFE FOR HIS FRIENDS
His medals were: Medal 1939-45; France Germany Medal; War Medal; CVSM & Clasp. 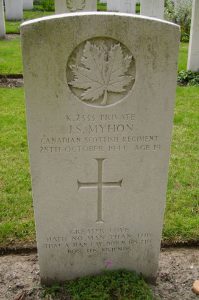