John was born on February 8 1922 in Trail, British Columbia as the son of Ladislov and Karolina (deceased) Tedavic, of Trail. His parents were married in 1912 in Rossland British Columbia. His brothers were Edward M. (also overseas in the army) and Joseph S. Tedavic (also overseas in the army) and his sister was Mrs. Frances Clements. And his other brothers John and Frank Tedavic were already earlier deceased.
He was a plate hanger and zinc casting (smelter worker) and member of Roman Catholic Church. He spoke English and Austrian.
He enlisted on January 28 1943 in Vernon British Columbia and he went on June 18 1943 overseas to the UK and he went thereafter on June 6 1944 to France for the D-Day landing.
John was killed in action on Friday June 9 age 22 in the D Coy near Putot en Bessin and he was temporarily buried there and reburied on January 31 1945 in Beny S/Mer.
At his headstone: SAFE IN THE ARMS OF JESUS
His medals were: 1939-45 Star; France Germany Star; Defence Medal; War Medal; CVSM & Clasp. 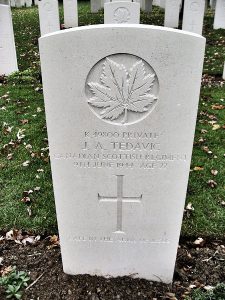