John was born on May 2 1917 in Rossland British Columbia as the son of John Duncan and Catherine Margaret Cameron of Vancouver. His parents were married on January 22 1916 in Sydney Nova Scotia. His sisters were Mrs. Mary Ann Wardley, Mrs. Margaret Jessie Combs and Mrs. Katherine Valerie Sevriene.
He was a mill worker and member of Roman Catholic Church.
He enlisted on July 14 1940 in Vancouver and he went on October 9 1942 overseas to the UK and he went thereafter on June 6 1944 to France for the D-Day landing. He was also wounded on June 9 and was evacuated to a hospital in the UK and he went after that to France again on July 30.
John was killed in action on Saturday April 28 1945 age 27 near the Leda River during the battle of Leer in Germany. And he was temporarily buried in Ihrhove Germany and was reburied on March 12 1946 in Holten.
His medals were: 1939-45 Star; France Germany Star; Defence Medal; War Medal: CVSM & Clasp. 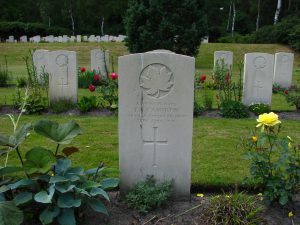