John was born on March 23 1913 in Vancouver as the son of Guy (deceased) and Mary Lenora Branscomb (both Americans) of North Vancouver. He had a sister who supported his mother.

He was a welder and member of the  United Church.

He enlisted on April 27 1943 in Vancouver after an unknown period of time with the  Ordnance Corps,  and he went for the basis training to the 31 CABTC in Cornwall, Ontario. He was on August 13 1944 transferred to Camp Borden Ontario to complete his education, and he went overseas to the UK on 1st Christmas Day December 25 1944 and he went thereafter on March 18 1945 to  NW-Europe  and he was on April 2 attached to the the D Coy of the ​​Canadian Scottish Regiment. He took part during the fights  in Didam, Deventer and Zwolle.

John was killed in action on Monday April 23 1945 age 22 at the last day of the battle of the liberation of Wagenborgen Groningen. He was temporarily buried in Siddeburen and on February 15 1946 reburied in Holten. 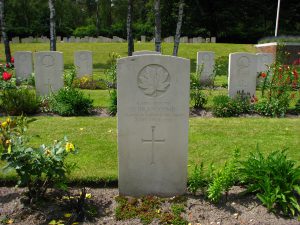