John was born on 30 Jan 1917 at Calgary as the son of  John  and Elizabeth Hughes. His brothers were Ronald en Ernest Hughes.

In 1942 he was called up under the NRMA terms and served 26 months in the RCA at various locations. On 26 Jun 44 at Prince Rupert BC he volunteered for active duty and on 16 Sep 44 proceeded to 1st Training Brigade at Debert NS.

John was killed in action on Monday April 23 age 28, the last day of fighting for the liberation of Wagenborgen. He was temporarily buried in Siddeburen and on February 15 1946 reburied in Holten.

At his headstone: IN LOVING MEMORY OF OUR DEAR SON EVER REMEMBERED BY MOM, DAD, ERNEST AND ROLAND 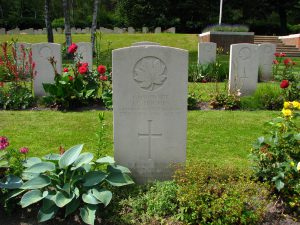