John was born on July 14 1924 in Margaree Nova Scotia as the son of John and Margaret MacFarlane, of Gillisdale, Inverness Co., Nova Scotia. His parents were married on September 3 1923 in South West Margaree. His brothers were Malcolm Lawry, Alex Francis and Alex Joseph MacFarlane. His half-brother (name unknown) was also overseas in the Canadian Army. And he had also a sister Mrs. Patrick.
His profession was a labourer and he was member of the Roman Catholic Church.
He enlisted on November 16 1943 in Halifax Nova Scotia and he went overseas to the UK on May 7 1944 and he went thereafter to France on June 23 1944.
John died of wounds on Sunday July 9 age 19 in the B Coy near Cussy and he was temporarily buried in La Delivrande and he was reburied on December 22 1944 in Beny S/Mer.
At his headstone: DIED OF WOUNDS AT CAEN. BORN AT MARGAREE, NOVA SCOTIA. “REST IN PEACE
And his medals were:1939-45 Star; France Germany Star; War Medal; CVSM & Clasp. 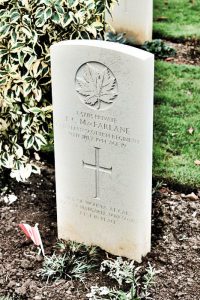