John was born on September 22 1909 in Glasgow Scotland as the son of Daniel and Lottie Emma McLellan. His parents were married on June 4 1909 in Glasgow. He was married on September 3 1940 in Stewart British Columbia with Beatrice Augusta McLellan, of Rossland, British Columbia. Their daughters were Mary Elizabeth and Ada Gwendoline McLellan. His father and two brothers still lived in Scotland.
He was a smelter man and member of the Christian Science (OD). He enjoyed swimming, soccer, hunting, shows, dancing and general reading.
He enlisted on January 10 1944 in Vancouver and he went on October 20 overseas to the UK and he went thereafter on November 18 to NW Europe.
John was killed in action on Tuesday February 20 1945 age 45 in the C Coy at the Moyland Wood during the battle of the Rhineland. And he was temporarily buried in Bedburg Hau Germany and he was then on September 20 1945 reburied in Groesbeek.
At his headstone: GOD IS LOVE AND HATH GIVEN TO US ETERNAL LIFE
His medals were: 1939-45 Star; France Germany Star; War Medal; CVSM & Clasp. 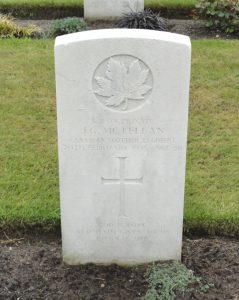