John was born on September 24 1922 in Andrew Alberta as the son of Sam and Mary Hurdy (both Ukrainians and deceased). His brother was Metro Hurdy and also his next of kin together with sister Kay Dromisky and his other brothers were W.M. Hurdy (also overseas in the army) and Steve Hurdy (deceased in 1937). And his other sisters were Jennie Ellen and Annie Hurdy.
He was a farmer and member of the Church of England. He spoke English and Ukrainian.
He enlisted on November 10 1941 in Edmonton and he went on June 24 1943 overseas to the UK. And he went thereafter as reinforcement on June 11 1944 to France.
John was killed in action on Saturday July 8 age 21 in the A Coy near Cussy and he was temporarily buried there and reburied on February 6 1945 in Beny S/Mer.
At his headstone: GONE, DEAR BROTHER GONE FOREVER BUT IN OUR HEARTS YOU WILL ALWAYS REMAIN
His medals were: 1939-45 Star; France Germany Star; Defence Medal; War Medal; CVSM & Clasp. 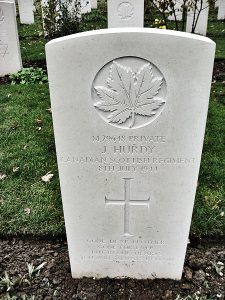