John was born on November 13 1913 in Everett Ontario as the son of Stephen (deceased) and Sophia (American) Smith, of Toronto. They were married on May 23 1910 in Toronto. His brother Clement A. Smith also was in the army overseas and his sisters were Josephine F.B. Kraftchek and Gertrude Snider.
He was a shipyard worker and member of the Roman Catholic Church. His sports were baseball and hockey and his hobbies were metal work, repairing watches and reading non-fiction.
He enlisted on February 8 1944 in Vancouver and he went overseas to the UK on October 12 and he went thereafter on November 11 to NW Europe. He was seriously wounded on February 20 1945 during the battle of the Rhineland in the Moyland Wood and he was evacuated then to a hospital England.
John died of these wounds there on Tuesday March 6 1945 age 31 and he was buried then at the Brookwood Military Cemetery.
At his headstone: IN LOVING MEMORY OF SON AND BROTHER WHO GAVE HIS LIFE FOR HIS COUNTRY
His medals were:1939-45 Star; France Germany Star; War Medal and CVSM & Clasp. 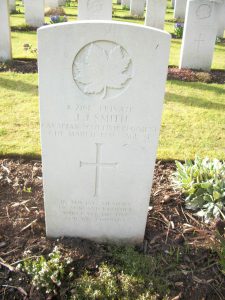