Joseph was born on July 20 1925 in Penetanguishene, Ontario as the son of Joseph and Ethel Cadeau nee Columbus, of Penetanguishene. His parents were married on April 25 1922. His brothers were Anselm, Elmer, Cornelius, Arthur, Louis and John Cadeau and his sister was Margaret Mary Cadeau. His aunt was Mrs. Leo Columbus. One brother died as a baby after his birth in 1922 and a girl baby twin died 2 weeks after their birth in 1929.
He was a sailor and member of the Roman Catholic Church. He liked rabbit and duck hunting and read a little.
Joseph was killed in action on Friday October 27 age 19 in the C Coy near the Breskens Pocket and the Scheldt in Holland and he was temporarily buried in Hoofdplaat Holland and on June 11 1945 reburied in Adegem.
At his headstone: IN SACRED MEMORY OF JOSEPH DEAR SON OF J. AND E. CADEAU, PENETANGUISHENE, ONTARIO. MAY HE REST WITH GOD
His medals were: Medal 1939-45; France Germany Medal; War Medal; CVSM & Clasp. 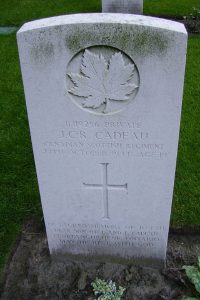