Kenneth was born on October 21 1921 in Lauder Manitoba as the son of Harold M. and Ann Louise Couling (English) and already deceased, of Lauder. His parents were married on November 15 1916 in Winnipeg. His brother was John Leonard Couling and his younger sister was Audrey Louise Couling.
His profession was a farmer and he was member of the United Church and his hobbies were: softball, he liked parties and dancing and was not reading much but true stories.
He enlisted on November 10 1942 in Winnipeg and he went overseas to the UK on May 22 1943 and he went thereafter to France for the D-Day landing on June 6 1944.
Kenneth was wounded in action on August 15 and he was thereafter killed in action in the B Coy on Friday September 15 1944 age 22 near Calais. And he was temporarily buried in Hardinghen and reburied on July 31 1945 in Calais Leurbringhen.
At his headstone: UNTIL THE DAY BREAK AND THE SHADOWS FLEE AWAY
His medals were: 1939-45 Star; France Germany Star; Defence Medal; War Medal; CVSM & Clasp. 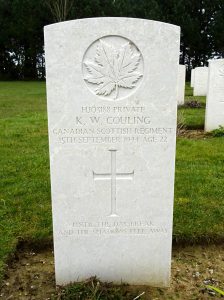