Lawrence was born on January 28 1919 in Wembley, Alberta as the son of Albert Lawrence Osborne and Lillian Jemima Osborne, of Pipestone Creek, Alberta. His parents were married on November 2 1915 in the Dalles in Oregon USA. His brother was Raymond Harold Osborne and his sister Myrille Marian Trottier.
His profession was a farmer and packer and he was member of the United Church.
He enlisted on May 29, 1943 in Wetaskiwin Alberta and he went overseas to the UK on September 1 1943.
Lawrence was killed in action on Tuesday June 6 1944 age 25 in the C Coy during the first assault on D-Day and he was temporarily buried at the civilian cemetery in Lantheville and on July 28 1945 reburied in Bretteville S/Laize.
His medals were: 1939-45 Star; France Germany Star; Defence Medal; War Medal; CVSM & Clasp. 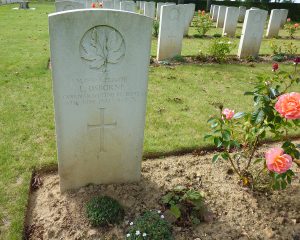