Leo was born on April 1 1920 in Moncton New Brunswick as the son of Patrick and Mary (French and deceased) Dupuis. They were married on May 28 1914. His brothers were Andre (also in the army), Clifford (deceased in 1931) and Docility Dupuis (army overseas too). And his sisters were Angeline Dupuis, Mrs. Dorothy Boucher nee Dupuis and Dacite Dupuis. And another family member was Vital LeBlanc.
He was a labourer and member of the Roman Catholic Church and he spoke English and French.
He enlisted on November 12 1940 in Moncton and he went on August 19 1941 overseas to the UK and he went thereafter on June 6 1944 to France for the D-Day landing. He was seriously wounded in action on February 17 1945.
Leo died of these wounds on Sunday February 18 age 24 at the Moyland Wood during the battle of the Rhineland. And he was temporarily buried near Mariënbosch in Nijmegen and he was then on September 28 1945 reburied in Groesbeek.
His medals were: 1939-45 Star; France Germany Star; Defence Medal; War Medal; CVSM & Clasp. 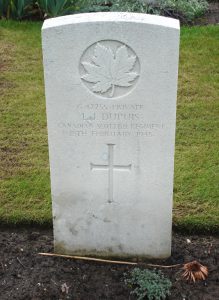