Leslie was born on July 7 1904 in Seattle USA as the son of Leslie (American) and Rose Smith nee Miller (French) of the USA and both deceased. His parents were married on May 15 1899 in Vancouver Washington USA.
His brother was James Miller and his sister Mrs. Margaret Syzemorre (Merlin Oregon USA) was his next of kin. And his half-sister was Mrs. Violia Anderson. His uncle was Albert Inonlet.
He was a prospector, harvest hand and member of the Church of England.
He enlisted September 25 1941 in Victoria British Columbia and he went on March 29 1942 overseas to the UK and he went thereafter on June 6 1944 for the D-Day landing to France. He was then wounded in action on August 12 but recovered within 17 days.
Leslie was killed in action on Friday October 6 age 40 in the A Coy near the Leopold Canal in Belgium and he was temporarily buried in Maldegem and reburied on July 15 1945 in Adegem.
At his headstone: MY BROTHER WHO DIED FOR FREEDOM. I PRAY GOD HIS SACRIFICE WAS NOT IN VAIN
His medals were: 1939-45 Star; France Germany Star; Defence Medal; War Medal; CVSM & Clasp. 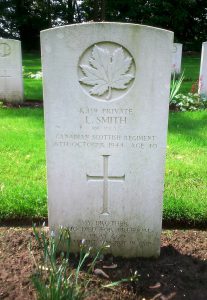