Louis was born on January 20 1924 in Trail British Columbia as the son of Mary and Antonio Ciarelli (Italian) of Trail, British Columbia. His parents were married on September 14 1919 in Trail. He was the brother of Frank, Raymond, Helen and Lorraine Ciarelli.
His profession was a truck driver and he was member of the Roman Catholic Church.
He enlisted on August 15 1942 in Trail and he went overseas to the UK on May 22 1943 and he went thereafter on June 6 1944 to France for D-Day.
Louis was killed in action on Saturday July 8 age 20 in the A Coy near Cussy and he was temporarily buried there and he was reburied on February 7 1945 in Beny S/Mer.
And his medals were: 1939-45 Star; France Germany Star; War Medal; Defence Medal; CVSM & Clasp.
Louis is commemorated on the Trail Cenotaph, Eldorado Street, Trail, British Columbia. 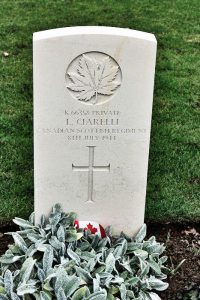