Louis was born on June 20 1920 as the son of  George Silvester Dautremont and Marcella Seraphine Dautremont (both from the USA), in a farm community in Alida, Saskatchewan. He had two brothers: Hugh and Rene (also overseas in the Canadian Army) and three sisters: M. Vincent, Alice A. and Marcella G. Dautremont. His profession was  farmer and belief Roman Catholic .

He was called for the NRMA training on March 4  1942, and enlisted at the coast artillery and was placed at the A.23 CATC in Halifax NS for the basic training and at the  BC Esquimalt for an air defence training. He was placed in July 1942 to the 102 Z BTY RCA in Prince Rupert BC till December 1943, and then sent to the CABTC in Orillia ON. And after that he went on January 10 1944 to Camp Borden for an amoured corps training. From April 22 till October 8 1944 he was on leave on the farm in Saskatchewan, after that he went overseas on November 24 1944 and disembarked in the UK on December 5 as reinforcement of the armoured corps.

He was transferred on December 9 1944 to the infantry corps and arrived in North West Europe on February 13 1945. He became a soldier of the Canadian Scottish Regiment on February 22 1945 in the Rhineland (Germany) and served with the  ‘D’ Coy in Emmerich and Deventer.

Louis was killed in action on Saturday April 21 1945 age 24 on the first day of the liberation of Wagenborgen. He was temporarily buried in Siddeburen and reburied on February 15 1946 in Holten.

At his headstone: I have found a good fight, I have finished my course, I have kept the faith. 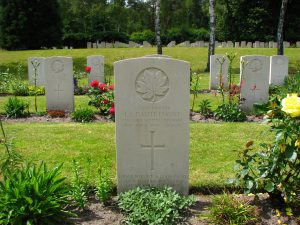