Max was born on July 21 1920 in Innes Saskatchewan as the son of Randolph James Brown and Bessie Leesley (separated & divorced), of Oto, Iowa, U.S.A.
He was a farmer and member of the United Church.
He enlisted on June 4 1943 in Regina Saskatchewan and he went on February 25 1944 overseas to the UK and he went thereafter as reinforcement on June 6 to France for the D-Day landing. He was wounded on July 8 near Cussy France and then taken to a hospital in the UK. He disembarked NW Europe again on October 10.
Max was killed in action on Friday February 9 1945 age 24 at the Waal Flats during the battle of the Rhineland. And he was temporarily buried at Jonkerbosch Cemetery in Nijmegen and he was then on July 26 1945 reburied in Groesbeek.
At his headstone: I LOVE THE LORD BECAUSE HE HATH HEARD MY VOICE AND MY SUPPLICATIONS”
His medals were: 1939-45 Star; France Germany Star; Defence Medal; War Medal; CVSM & Clasp. 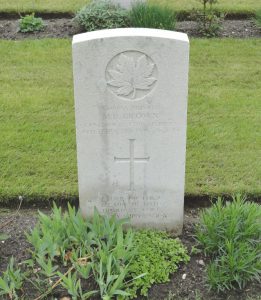