Mayeso was born on April 19 1919 in Maidstone Saskatchewan as the son of Allen (deceased in 1919) and Luvina (also deceased) Mayes nee Scott and both Americans. They were married in 1912 in Maidstone. His brother Carl Mayes was his next of kin and his sister was Tollia Mayes and his uncle was Ernie Grant. He filled in his soldier’s service book in for the nationality of his parents: negro.
He was a labourer farm hand and member of the Agnostic Church. His hobby was metal work. He liked baseball, rugby, fishing, hunting, swimming, shows, dancing and a little reading.
He enlisted on February 29 1944 in Calgary and he went on June 2 overseas to the UK and he went thereafter on July 14 to France.
Mayeso died of wounds in action on Tuesday February 9 1945 age 25 in the B Coy at the Waal flats during the battle of the Rhineland. And he was temporarily buried at Mariënbosch in Nijmegen and he was then on September 28 1945 reburied in Groesbeek.
His medals were: 1939-45 Star; France Germany Star; War Medal; CVSM & Clasp. 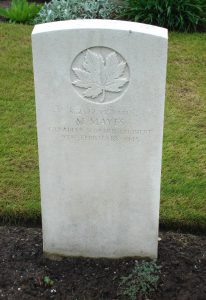