Melville was born on June 28 1914 in Cavan Ontario as the son of Charles William (English) and Matilda Jane (deceased at birth child in 1921) Lawrence, of Peterborough, Ontario. His parents were married in March 1911 in Fraserville Ontario. His stepmother was Hettie Lawrence. His brothers were Gordon Angus, Thomas Roy and Howard Moffett (in the army overseas too) Lawrence and his half-brother was William Clinton Lawrence. His sister was Mary Margaret Sarah Lawrence.
He was a carpenter and member of the United Church.
He enlisted on September 23 1940 in Cobourg Ontario and he went on May 22 1943 overseas to the UK and he went thereafter on June 6 1944 as reinforcement to France for the D-Day landing. He was seriously wounded in action on July 9 during the battle of Cussy in the C Coy and he was then evacuated to a hospital in Gosport England.
Melville died there on Wednesday July 12 1944 age 30 and he was buried at the Brookwood Military Cemetery.
His medals were: 1939-45 Star; France Germany Star; Defence Medal; War Medal; CVSM & Clasp. 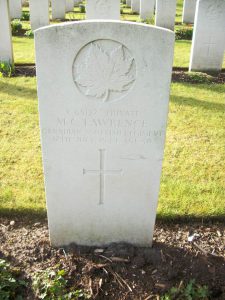