Michael was born on March 23 1922 in Poland-West Ukraine as the son of Peter and Pauline Michaluk of Michichi, Alberta. His parents were married on November 27 1918 in West Ukraine. His brother was John Michaluk and his sisters were Mary and Alice Michaluk.
He was a truck driver and member of the Roman Catholic Church. He spoke English and Ukrainian. His hobby was wood work and he liked baseball and hockey and read articles, fiction and literature of modern machinery.
He enlisted on August 21 1942 in Calgary and he went on June 18 1943 overseas to the UK and he went thereafter on June 6 1944 to France for the D-Day landing.
Michel died of wounds on Tuesday August 15 1944 age 22 in the B Coy near Falaise and he was temporarily buried along the road of La Croix Midi and reburied on May 14 1945 in Bretteville S/Laize.
His medals were: 1939-45 Star; France Germany Star; Defence Medal; War Medal; CVSM & Clasp. 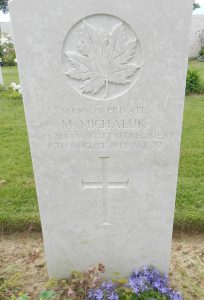