Murray was born on September 3 1910 in Glace Bay Nova Scotia as the son of Hector and Catherine Mackenzie (deceased) of Glace Bay. His parents were married on January 7 1901 in Jona Cape Breton. He was married on January 8 1931 in Glace Bay with Elizabeth Ann MacKenzie and she already died in 1933. And their son was Murray Hector MacKenzie. His brothers were John, Daniel, Ray, Leonard, Duneon and Ivory MacKenzie. And his sisters were Mrs. Katie Ludlow, Mrs. Rita Jolnik and Mrs. Marion Patterson.
He was a labourer and member of the Roman Catholic Church. He played a little baseball and read magazines (pulp) a little and had otherwise a few interests.
He enlisted on November 4 1943 in Halifax Nova Scotia and he went on May 7 1944 overseas to the UK and he went thereafter on June 23 to France.
Murray was killed in action on Saturday October 7 age 34 in the C Coy near the Leopold Canal in Belgium and he was temporarily buried somewhere and on May 23 1945 reburied in Adegem.
His medals were: The Medal 1939-45, France Germany Medal, War Medal; CVSM & Clasp. 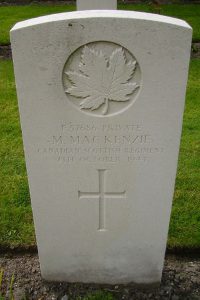