Noel was born on September 21, 1919 in Wabasca, Alberta as the son of Magloire (deceased in 1926) and Marie Rose Powder of Desmarais, Alberta. His parents were married on July 4 1906 in St Martin Mission. His mother remarried as Mrs. Cardinal after the war. His brothers were Eugene (Etienne), Edwin, David and Jean Boskoyous. And his sisters were Sophie, Flora and Mary Boskoyous. And his half-sister was Clarisse Marie.
His profession was a trapper and he was member of the Roman Catholic Church. He spoke English and Cree.
He enlisted on November 1 1942 in Dundurn Training Area Saskatchewan and he went overseas to Gourock Scotland on April 19 1942 and he went thereafter to France on June 12 1944 and he was taken on strength to the Royal Winnipeg Rifles on June 14.
Noel died of wounds on Friday July 4 1944 age 24 and he was reburied on April 23 1945 in Beny S/Mer.
And his medals were: 1939-45 Star; France Germany Star; Defence Medal; War Medal; CVSM & Clasp.
He served with the Canadian Scottish Regiment and the Royal Winnipeg Rifles. 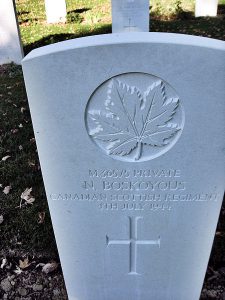