Norman was born on November 18 1912 in Clydebank Scotland as the son of Norman and Marion McKenzie, of Vancouver. His parents were married on June 24 1904 in Glasgow Scotland. His brother was Donald McKenzie and another brother Angus Martin McKenzie was killed in action on September 3 1944 in Italy. And he was buried  at the Gradara Canadian War Cemetery in  plot 2-G-69. His sisters were Mary Smith, Syble MacLennan and Catharine Rambottom.
His profession was a mill worker and he was member of the Church of Scotland.
He enlisted on March 17 1941 in Vancouver and he went overseas to the UK on June 12 1942 and he went thereafter to France on June 6 1944 for the D-Day landing.
Norman was killed in action on Saturday July 8 age 31 near Cussy and he was temporarily buried there and he was reburied on February 7 1945 in Beny S/Mer.
And his medals were:1939-45 Star; France Germany Star; Defence Medal; War Medal; CVSM & Clasp. 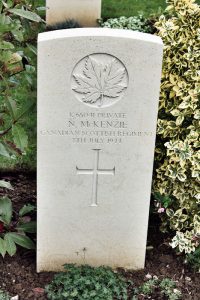