Olaf was born on August 30 1909 in Nordlind Norway as the son of Mr. (deceased) and Anna Austvik of Norway and his sister was Arnhild Austvik.
He was a miner and member of the Lutheran Church. He spoke Norwegian and English.
He enlisted on July 16 1940 in Zeballos British Columbia and he went overseas to the UK on September 2 1941.
Olaf died of wounds due to a car accident on Thursday September 11 1941 in England age 32 in the A Coy and he was on September 19 buried at the Brookwood Military Cemetery.
His medals were: War Medal and CVSM & Clasp. 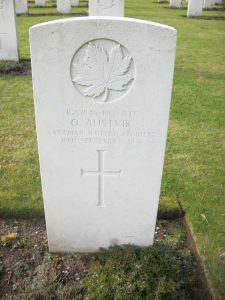