Olof was born on January 31 1914 in Esterhazy Saskatchewan as the son of Peter Anselm and Selma M. Nystrom (both Swedish), of Kandahar, Saskatchewan. His parents were married on October 24 1908 in Sweden.
His sisters were: Anna Florence, Mary Kristina, Hanna Margaret, Lily Victoria, Violet Eugenia and Agnes Josephine Nystrom. And his brothers were: Andrew Bernard and Jonas Reinald Nystrom and his uncle was Mr. N. Nystrom.
His profession was a rock driller and farmer and he was member of the Lutheran Church (OD). His hobbies were: swimming, fishing and reading sometimes.
He enlisted on February 4 1943 in Prince Rupert British Columbia and he went overseas to the UK on May 7 1944 and he disembarked thereafter France on June 12. He was taken on strength on August 7 from the Canadian Scottish Regiment to the Calgary Highlanders.
Olof was killed in action on Friday August 25 1944 age 30 and he was temporarily buried in an orchard in la Bruyière and on July 5 1945 reburied in Bretteville S/Laize.
At his headstone: FOR ME A BLOOD-BOUGHT FREE REWARD. A GOLDEN HARP FOR ME
His medals were: 1939-45 Star; France Germany Star; War Medal; CVSM & Clasp.
He served with The Canadian Scottish Regiment and The Calgary Highlanders. 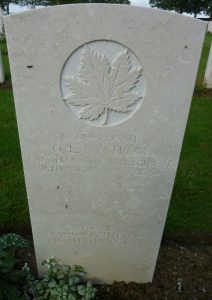