Paul was born on August 12 1925 in Edam Saskatchewan as the son of Albert (German) and Catherine (American) Rieger and both deceased. His parents were married on August 9 1921 in Saskatchewan. His sister Margaret Mary Rieger was his next of kin and his brothers were Charly and Albert Rieger (also in the army overseas). And his grandmother was Mrs. M. Bonson and his uncle Fred (Chas) Bonson.
He was a welder and member of the Roman Catholic Church. He liked swimming, fishing, shows, dancing and reading in general.
He enlisted on January 18 1944 in Vancouver and he went overseas to the UK on September 6 and he went thereafter on September 25 to France.
Paul was killed in action on Saturday October 28 age 19 in the C Coy near the Breskens Pocket and the Scheldt and he was temporarily buried in Hoofdplaat, Holland and on June 12 1945 reburied in Adegem.
At his headstone: OUR BELOVED BROTHER PAUL EVER LOVINGLY REMEMBERED BY MARGARET, ALBERT, CHARLIE
His medals were: Medal 1939-45; France Germany Medal; War Medal; CVSM & Clasp. 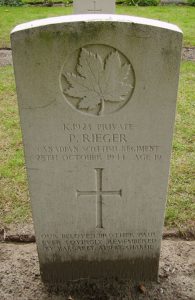