Pete was born on August 28 1919 in Modesto California USA as the son of Joseph (deceased in 1935) and Julia Miller (deceased). His parents were married in March 1915 in Chicago Illinois USA. His brothers were George and John Jay Miller and his sisters were Miss Marjorie Miller, Mrs. Ellen Van De Pole and Rose Marlin and all also from the USA. His brother John Jay became his next of kin.
His profession was a construction labourer and he was member of the Roman Catholic Church.
He enlisted on January 9 1941 in Vancouver and he went overseas to the UK on September 2 1941 and he went thereafter to France on June 6 1944 for the D-day landing.
Pete died of wounds on Saturday June 10 age 24 in the D Coy near Putot en Bessin and he was temporarily buried in Graye S/ Mer and reburied on December 13 1944 in Beny S/Mer.
His medals were: 1939-45 Star; France Germany Star; Defence Medal; War Medal; CVSM & Clasp. 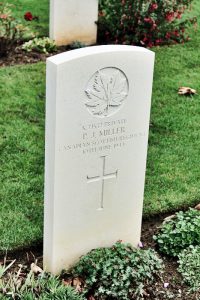