Ralph was born on January 23 1916 in Davidson Saskatchewan as the son of Cyrus Alonso and Elta (deceased) Leach and both American. Ruth Florence Ostrum of Trail British Columbia was his common law wife and their daughter was Katherine Florence Leach. He also received permission on September 15 1945 to marry Sophia Looijen of Ede (Holland), just some months before he died.
His brothers were Scott, Earl, Ivan and Ray Leach and his sisters were Helen Johnson, Sadie and Mabel Leach.
He was a platers helper and member of the United Church. He had earlier had his own farm at Big River and had spent two years at the Cominco smelter at Trail. He enjoyed sports like baseball, softball, hunting, swimming and boxing. He read western stories, sport magazines and detectives.
He enlisted on May 4 1944 1942 in Vancouver and he went on December 31 1944 overseas to the UK and he went thereafter on March 24 1945 to NW Europe. He was wounded on April 20 and taken to a hospital on April 26 1945 due to a flesh wound at his thigh and discharged on April 28.
Ralph died in a hospital on Thursday December 20 1945 age 29 after an operation of a spontaneous rupture of his spleen by natural cause. And he was buried after that on December 21 in Groesbeek.
His medals were: 1939-45 Star and France Germany Star. 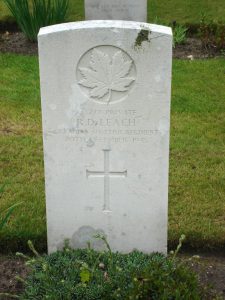