Reginald was born on May 10 1913 in Edmonton as the son of Mr. and Mrs. Willis nee Parker ( both British and deceased). He was their only child and his friend Frederick Crowder was his next of kin and another friend was Christie Grant Block. His father married again another woman in California USA and therefore he was sent back to a Canadian children’s home in Edmonton and after that brought up by Mrs. Crowder, the mother of his friend Frederick.
He was a farmer and member of the Church of England. His hobby was hunting and he was interested in sports like baseball, softball and boxing and he enjoyed shows but not dancing. He played the accordion for his own amusement and was reading a little in general.
He enlisted on February 17 1943 in Edmonton and he went overseas to the UK on March 14 1944 and he went thereafter as reinforcement on June 9 to France.
Reginald died of wounds on Tuesday August 15 age 31 in the D Coy near Falaise and he was temporarily buried in Mondeville and reburied on April 28 1945 in Bretteville S/Laize.
His medals were: 1939-45 Star; France Germany Star; War Medal; CVSM & Clasp. 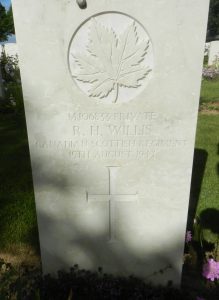