Richard was born on July 12 1925 in Shell Lake Saskatchewan as the son of Mr. Flebbe (German) and Cora (American) Bush. His stepfather was Edward Bush. His brothers were Louis, Conrad and William Flebbe ( all three in the Canadian army too) and his sisters Elsie Carper and Iona Haffter.
He was a shipyard worker and member of the Lutheran Church (OD).
He enlisted on July 14 1943 in Vancouver and he went on October 20 1944 overseas to the UK and he went thereafter on November 18 to NW Europe.
Richard was killed in action on Tuesday February 20 1945 age 19 in the B Coy at the Moyland Wood during the battle of the Rhineland. And he was temporarily buried in Bedburg Hau Germany and he was then on September 19 1945 reburied in Groesbeek.
His medals were: 1939-45 Star; France Germany Star; War Medal; CVSM & Clasp. 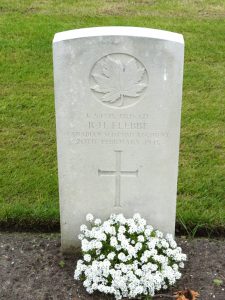