Robert was born on September 30 1906 in Shoal Lake Manitoba as the son of Milton (deceased) and Margaret Craik (Iceland), of Saskatoon, Saskatchewan. His brothers were Milton Leslie, William Franklin, Carl Everet and Egil Christian Craik And his friend was Lorraine Thompson.
He was a shipbuilder and member of the Presbyterian Church.
He enlisted on May 2 1944 in Vancouver and he went overseas to the UK on January 1 1945 and he went thereafter to NW Europe on February 15.
Robert was killed in action on Monday April 9 1945 age 38 in the C Coy during the battle of Deventer and he was temporarily buried in Oxe near Deventer and reburied on December 17 1945 in Holten.
At his headstone: REST YOU IN PEACE FOR EVER HOLY IN OUR SIGHT. MOTHER AND BROTHERS
His medals were: 39-45 Star; France-Germany Star; War Medal ; CVSM & Clasp. 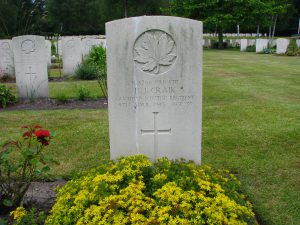