Robert was born on 3 Feb 1907 at Cumbermere, Ontario, as son of William John Reid en Christina Ann Reid. He was married with Mary Helen Augustine  Reid and they had a daughter Roselba Mary Read.

He worked as a miner before being called up for training and service in July 1942. On 3 Mar 44 he volunteered for active duty at 20 CABTC Brantford Ontario and was posted to A010 Camp Borden for final training before going overseas. He arrived in the UK on 10 Aug 44, proceeded to France on 6 Sep and joined 1 C SCOT R on 23 Sep 44, during the fighting to capture Calais. On 26 Sep he was wounded in action and evacuated to hospital in England, On 25 Nov he again arrived in NW Europe, to rejoin 1 C SCOT R and be assigned to the Carrier Platoon of Support Company on 1 Dec 44, He saw action in the Rhineland and across the Rhine at Emmerich and Deventer.

Robert was killed in action on Saturday April 21 1945 age 38 during the first attack for the liberation of Wagenborgen. 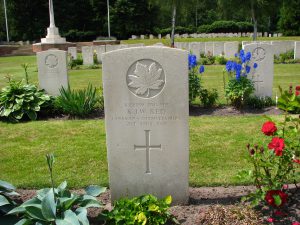