Robert was born on October 10 1922 in Vancouver as the son of George William and Arvillia Victoria Emery, of Vancouver. They were married on May 18 1922 in Vancouver. His sisters were Madelyn Francis and Armine Arvillia Emery.
He was a rigger and member of the United Church. He could not take on sports of an earlier injury. He liked hunting and fishing and read very little.
He enlisted on November 7 1942 in Vernon British Columbia and he went on June 18 1943 overseas to the UK and he went thereafter on 4 September 1944 to France.
Robert was missed in action during the battle of the Leopold Canal in Belgium and he was presumed to be killed in action there in the C Coy age 22 on Monday October 23 1944. They thought first by eyewitnesses reports that he was captured by the Germans and became the a prisoner of war (POW) in a POW camp in Germany.
His medals were: 39-45 Medal; France Germany Medal; Defense Medal; War Medal; CVSM & Clasp. 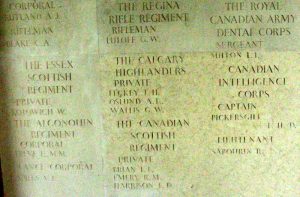