Robert was born on July 28 1920 in Verdun, Québec as the son of Albert Henry and Gertrude Middleton Cooper (deceased) and both English, of Vancouver. His parents were married in October 1919 in Verdun. His brother was Albert George and his sister Patricia Ruth Cooper. His half-sisters were Margaret Gertrude and Carol Anne Cooper.
His profession was a upholsterer and he was member of the Baptist Church.
He enlisted on April 29 1940 in Calgary and he went overseas to the UK on September 4 1940 and he went thereafter on Tuesday June 6 1944 to France for the landing on D-Day.
Robert was killed in action on the same day age 22 and he was temporarily buried in Graye S/Mer and he was reburied on December 14 1944 in Beny S/Mer.
At his headstone: I AM THE WAY, THE TRUTH AND THE LIFE ST. JOHN XIV.6
And his medals were:1939-45 Star; France Germany Star; Defence Medal; War Medal; CVSM & Clasp. 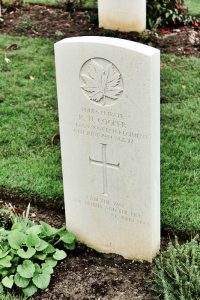