Robert was born on June 29 1912 in Wetaskiwin Alberta as the son of William Rufus and Lillian Winnifred Mae Shearing of Victoria British Columbia. They were married on November 15 1905 in London England. He was married on December 4 1935 in St Johns Victoria with Annie Shearing, of Saanich, British Columbia. His brothers were William Archibald and Cyril Wilfred Shearing (in the army overseas too) and his sister was Emmaline Shearing.
He was a painter and member of the Church of England. His hobby was oil painting and he liked music like mouth organ, classical music, light opera and visiting clubs.
He enlisted on July 9 1942 in Victoria and he went on November 29 1944 overseas to the UK and he went thereafter on December 30 to NW Europe.
Robert was missed and killed in action on Sunday February 18 1945 age 32 in the C Coy at the Moyland Wood during the battle of the Rhineland. And he was temporarily buried in Bedburg Hau Germany and he was then on September 13 1945 reburied in Groesbeek.
At his headstone: CALMLY HE SLEEPS AS SLEEP THE BRAVE, WHERE LIE THE NATION’S DEAD
His medals were: 1939-45 Star; France Germany Star; War Medal; CVSM & Clasp. 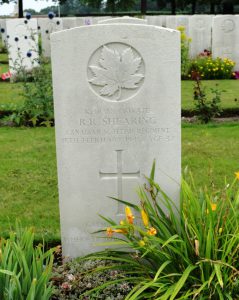