Robert was born on August 28 1924 in Edmonton as the son of Robert William and Winifred Gladys Bradley (both British), of Vancouver. His parents were married on September 28 1921 in Montreal. His father was overseas too as a major with the Dental Corps. His brother was Gordon Stanley Bradley.
His profession was a time keeper for a construction company and he was member of the Church of England. He spoke English, French and German. And he was studying these two last languages too. And he liked baseball, reading fiction and non-fiction and doing carpentry work and he played string bass in dance orchestra.
He enlisted on January 30 1943 in Edmonton and he went overseas to the UK on May 8 1944 and he went thereafter to France on June 9.
William was killed in action on Saturday July 8 age 19 near Cussy and he was temporarily buried there and was reburied on February 7 1945 in Beny S/Mer.
And his medals were: 1939-45 Star; France Germany Star; War Medal; CVSM & Clasp. 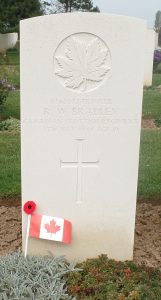