Ronald was born on July 4 1923 in Vancouver as the son of James and Agnes Batty, of Vancouver. His parents were married in 1919 in Newcastle on Tyne in England. His brothers were Allan James and William Albert Batty.
He was a shipyard worker and member of the Church of England.
He enlisted on October 24 1942 in Vancouver and he went overseas to the UK on June 18 1943 and he went thereafter on June 6 1944 to France for the D-Day landing.
Ronald was killed in action and missed on Saturday June 10 age 20 in the C Coy near Putot en Bessin and he was temporarily buried near Marcelet and reburied on May 2 1945 in Beny S/Mer.
At his headstone: IN LOVING MEMORY OF OUR DEAR SON RON WHO DIED BRAVELY. MOM, DAD, BILL AND ALLEN
His medals were: 1939-45 Star; France Germany Star; Defence Medal; War Medal; CVSM & Clasp. 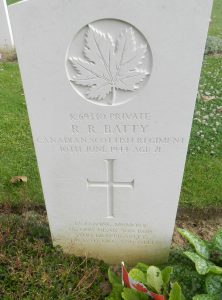