Ronald was born on October 22 1923 in Ganges, Saltspring Island, British Columbia as the only son of Sidney Walter and Gertrude Agnes Hoole nee Snow (both English), of Victoria, British Columbia. His sister was Heather Millicent Hoole and another relative was Arthur Snow.
He was a labourer and member of the Church of England.
He enlisted on June 26 1940 in Victoria British Columbia when he was just 16 years and he went overseas to the UK on August 23 1941 and he landed thereafter on June 6 1944 during D-Day at Normandy.
Ronald was killed in action on Friday October 27 1944 age 21 in the A Coy during the battle of the Breskens Pocket and the Scheldt in Holland and he was temporarily buried in Hoofdplaat (Holland) and on June 12 1945 reburied in Adegem.
At his headstone: O valiant heart Who to your glory came
His medals were: The 39-45 Star; The France Germany Star; Defense Medal; War Medal; CVSM & Clasp. 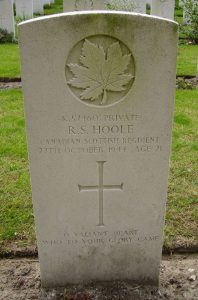