Roy was born on January 4 1907 in Kamloops, British Columbia as the son of George Thomas and Hellen Beatrice Strange, of Kamloops. They were married on October 30 1895 in Kamloops and divorced in 1920. His brothers were George Frederick and Albert Edward Strange and his sisters were Mrs. W.A. Palin, Mrs. J. Webster and Mrs. E. Armstrong.
He was a garage owner and member of the Church of England. He liked to do fishing and hunting, playing cards and billiards, reading much, dancing and to go to shows.
He enlisted on October 17 1942 in Vancouver and he went overseas to the UK on December 22 1943 and he went thereafter on June 6 1944 for the D-Day landing to France.
Roy was killed in action on Tuesday September 26 age 37 in the D Coy near Calais and he was temporarily buried in Hardinghen and reburied on July 31 1945 in Calais Leurbringhen.
At is headstone; REST IN PEACE, DEAR SON. EVER REMEMBERED BY FATHER, MOTHER, SISTERS AND BROTHERS
His medals were: 1939-45 Star; France Germany Star; War Medal; CVSM & Clasp. 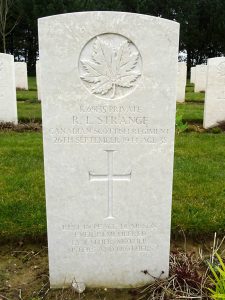