Roy was born on June 16 1915 in Lunenburg County Nova Scotia as the son of Heber and Elva Tufts, of Simpson Corner, Lunenburg Co. His parents were married on July 30 1911 in Bridgewater Nova Scotia. His brothers were Ernie William, Lee Ray, Ira Ray and Lyn Daulton Tufts. And his sisters were Mrs. Ola Saverny, Mrs. Langton Jisbert, Mrs. Muriel Whynot and Ola Jane Tufts.
He was a labourer and member of the United Church. He liked to skate and amateur mechanics, listened to radio, played piano and organ and read newspapers.
He enlisted on December 23 1942 in Halifax Nova Scotia and he went overseas to the UK on July 28 1943 and he went thereafter on July 11 1944 to France.
Roy died of wounds due a mine accident on Monday October 2 age 29 in the D Coy near Calais and he was temporarily buried in Longuenesse Souvenir cemetery Omer and later on Agust 7 1945 reburied in Calais Leurbringhen.
His medals were: 1939-45 Star; France Germany Star; Defence Medal; War Medal; CVSM & Clasp. 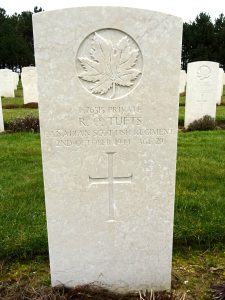