Russell was born on November 20 1921 in Daysland Alberta as the son of Russell Potter Borden and Harriet McNutt Borden (both English), of Langley Prairie, British Columbia. His parents were married on June 7 1915 in Masstown Nova Scotia.His brother Lt Lyman Francis Gordon Borden was in the army overseas too and his sisters were Sgt Prue Cox Borden (also in the army overseas) and Jane Lys Borden.
He was a student and member of the Church of England. He liked sports as tennis, badminton, swimming, and hiking. He played piano and visited some shows, no dancing and read classical literature, good fiction stories and newspapers.
He enlisted on October 1 1943 in Vancouver and he went first as a reserve to the Navy. And he went overseas to the UK on May 7 1944 and thereafter on June 13 as reinforcement to France.
Russell was killed in action on Friday August 11 age 22 in the D Coy near Falaise and he was temporarily buried in Mondeville and reburied on April 19 1945 in Bretteville S/Laize.
At his headstone: I.H.S.
His medals were: 1939-45 Star; France Germany Star; War Medal; CVSM & Clasp. 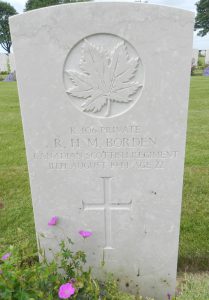